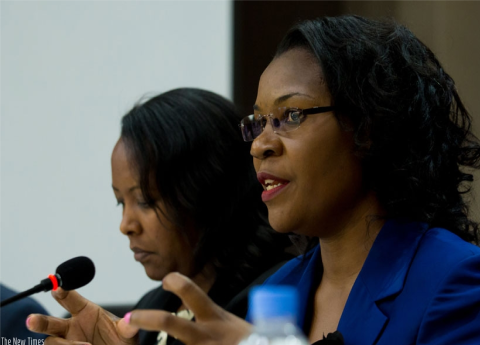 The Government has called on young entrepreneurs, mostly women and youth, to make use of Rwf700 million earmarked for start-up businesses as it targets to fund at least 3,000 projects in this financial year.

This was announced, yesterday, as at the Ministry of Public Service and Labour, together with other 18 stakeholders, launched a month-long awareness campaign through National Employment Programme (NEP) dubbed ‘Kora Wigire.’

The campaign, among other objectives, seeks to sensitise the youth women and people with disabilities to join Technical and Vocational and Education and Training (TVET) for self employment and creation of own business and to seize existing opportunities relating to entrepreneurship and business development.

Public Service and Labour minister Judith Uwizeye said the funding was in line with one of thekey pillars of the National Employment Programme: Entrepreneurship and Business

“Many people are not that much aware of the benefits in this project, that is why we are taking this campaign across the country, we have capital let people submit projects we can finance,” she said.

According to Uwizeye, depending on the nature of the project proposals, the Government, through established credit and savings cooperatives (SACCOs), gives the selected beneficiaries necessary toolkits that are valued at the rate varying between 20 per cent and 50 per cent of the entire project capital.

The remaining percentage will be a SACCO loan to the beneficiary and will, depending on terms of references, attract 4 per cent interest rate, which is also shared between SACCOs and Business Development Fund.

So far, according to Innocent Bulindi, the chief executive of BDF, the Fund boasts more than 90 per cent projects which were supported with guarantee and were able to process credit despite some challenges related to poorly written proposals.

“We are trying to work with financial institutions to give as many credits as possible but mostly for less likely beneficiaries, including people living with disabilities, financially struggling groups of women like street vendors, fresh graduates, Iwawa (vocational training and rehabilitation centre) graduates as we fine tune modalities through which people can secure guarantees as fast as possible,” Bulindi said.

It was launched back in 2014 and runs at a cost of Rwf9.8 billion partly funded the Swedish government and is supposed to last five years.

Since its inception, at least 80,672 jobs have been created. Last year alone saw the creation of 51,672 off-farm jobs in various sectors.

Should the benefits of the programme be sustained, government hopes to reduce the unemployment rate, which stands at 2 per cent going, according to a survey.

Recently, members of the Senate called for practical changes to skills development policies to tackle unemployment.

Currently, the Government hires 1.8 per cent of new graduates every year, according to the Ministry of Public Service and Labour.